The majority of pregnancies are not associated with any health problems. However, some women can experience health complications during pregnancy including high blood pressure, gestational diabetes mellitus (GDM), infections, preeclampsia, preterm birth, miscarriage and stillbirth. These complications can affect the mothers and/or the foetuses health and may even affect survival (1).

GDM is associated with foetal macrosomia (new-born with excessive weight) and also increases the risk of obesity and diabetes later in life for the infant(2). Additionally, preeclampsia can increase the risk of developing cardiovascular conditions and diabetes mellitus later in life in both the infant and the mother(3). Preeclampsia has also been shown to be a risk factor for the development of asthma, eczema and allergy in childhood(4).  Preterm birth has been associated with higher rates of cardiovascular disorders, neurodevelopmental disabilities and learning difficulties later in life, alongside an increased risk of asthma and atopic dermatitis(5,6).  It has been suggested that bacterial infections may be associated with pregnancy complications and may even induce some of these conditions(7).

Changes in the microbiota  The human body is home to trillions of microbial cells, the highest density of these cells is found in the intestinal compartment where they form the gut microbiota. The gut microbiota has several imperative roles which maintain and promote human health, including supporting the transformation of food components to release nutrients that would otherwise be inaccessible to the host, stimulating host cell differentiation, defending the body against pathogen invasion and exerting immune modulatory activities(8,9).

During pregnancy, the microbiota at various sites within the mother’s body change, including the gut and vaginal microbiota(10,11).  These changes occur to ensure optimum development of the foetus. Microbes are transferred from the mother to the foetus during pregnancy. Therefore, the microbial composition of the mother before and during pregnancy is important for the transmission of suitable microbes to the infant in order to facilitate a balanced microbiota in the infant (9,12).  Changes in the microbial composition are normal, however, inappropriate changes may lead to complications during pregnancy, as stated above. Metagenomic studies of infants gut microbiome have shown that a reduced diversity or aberrant composition has been linked to intestinal illness in infants and diseases that develop later in life, including asthma, inflammatory bowel disease and metabolic disorders(8). Therefore, it is imperative that an infant’s gut microbiome is adequately developed in utero and throughout infancy, in order to maximise health into adult(8,9,13,14).

Development of the microbiota during infancy 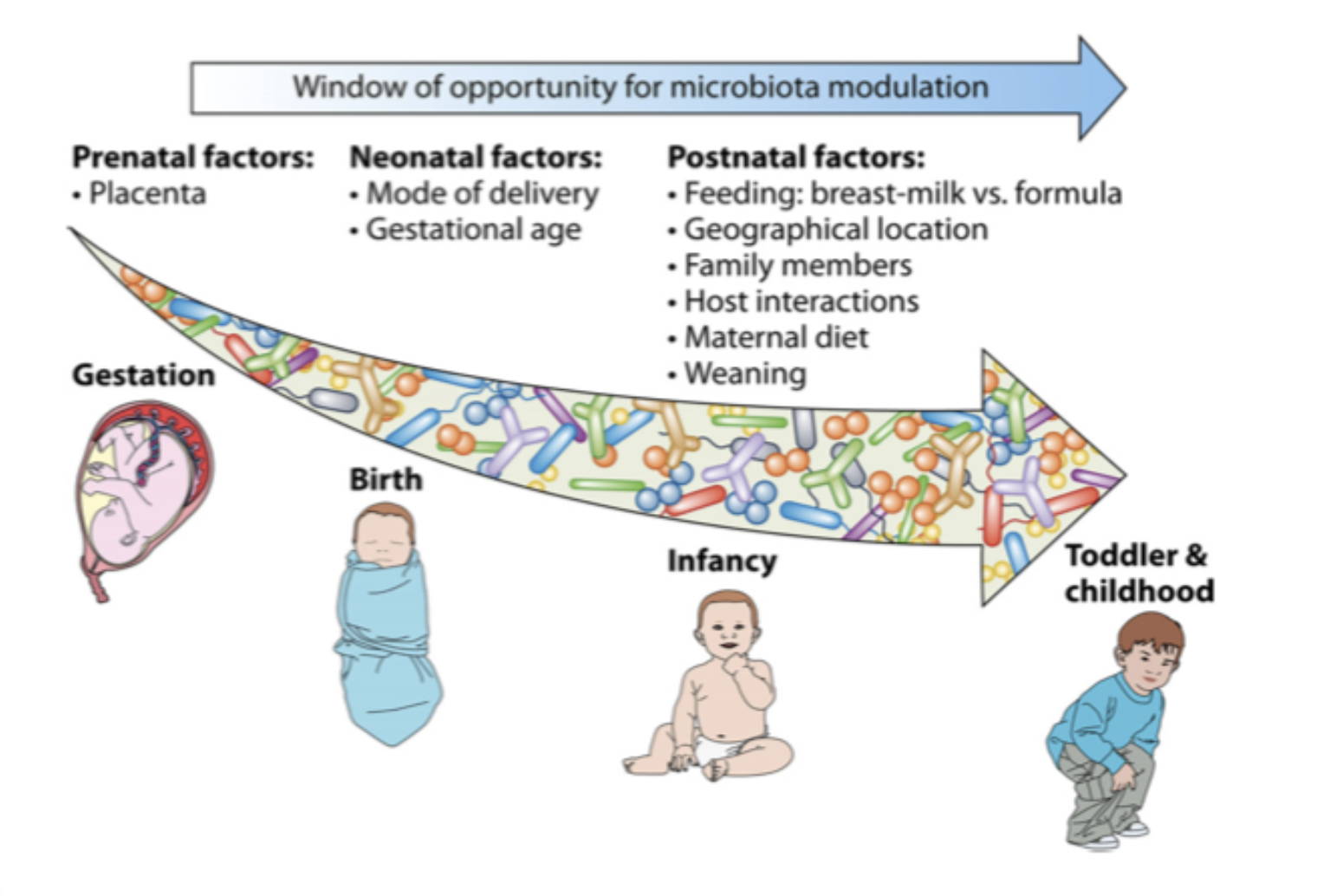 As shown in Figure 1 there are various stages during infancy for the gut microbiome to develop.This process can be affected by several environmental and host factors during the prenatal, neonatal and postnatal period (8).

This review will focus on the prenatal and neonatal factors affecting the gut microbiome in infants. Maternal nutrition constitutes a decisive factor in the in-utero environment and probiotics can be used during pregnancy to enhance the mother’s microbiota and subsequently, maximise the development of the infant’s gut microbiota(15).

As shown in Figure 1, one important window for microbiota development is in the placenta during gestation (8). Establishment and maintenance of placental integrity and function are critical to foetal growth, development and survival(16).  Metagenomics have demonstrated that the placenta harbours a low-abundance, yet metabolically rich site-specific microorganisms. The majority of this bacteria is non-pathogenic and belongs to the Firmicutes, Tenericutes, Proteobacteria, Bacteroidetes, and Fusobacteria phyla(16).

Evidence suggests that there is a mother-to-foetus efflux of commensal bacteria from the placenta and this process is actively driven by the mother. This ensure specific microbiota species are passed onto the foetus(9,16).

An incorrect establishment of the gut microbiota during these early stages of life has been associated to a disruption in immune homeostasis, which may be related to an increased risk of allergic diseases later in life(17).  This is thought to be due to immune regulated epigenetic imprinting and bacterial translocation during pregnancy from the mother to the child which trains the immune system to respond inappropriately to pathogens and commensals after birth(18).  Additionally, microbiota disturbances due to antibiotic usage during pregnancy has been associated to an increase in risk of obesity in later life for the infant(19).

However, recent evidence has suggested that there is no evidence for the presence of bacteria in a large number of placental samples, from both complicated and non-complicated pregnancies. It has been suggested that all bacterial signals were related to the acquisition of bacteria during labor and delivery or to the contimation of laboratory regents with bacterial DNA. Therefore, placental microbiome is not a common cause of adverse pregnancy and the human placenta does not have a mirobiome. However, there was one organsim which detected in a small number of samples that was present before the onset of labour, Streptococcus agalacgtiae. Although this organsism does not have a role in pre-eclampsia, small for gestational age (SGA) or pre-term birth, preinatal transmission of S. agalactiae from the mothers genital tract could lead to fatal spesis in the infant. This evidence suggests that there is no microbiome in the placenta, unless it is infected(20).

Therefore, the placenta may not be playing a role in the development of an infants microbiome.

In full term infants, the delivery mode is recognised as an important factor of the early gut microbiota composition(21).  When infants are delivered vaginally, they come into contact with maternal vaginal and faecal microbiota. This results in colonisation of an infant’s gut microbiome of feacal-associated microbes such as Lactobacillus and Prevotella(22). However, caesarean section (C-section) delivered infants are not exposed to these microbes and are more likely to be colonised with microorganism from maternal skin and the hospital staff and hospital environment(23-25).  Additionally, they show a reduce complexity in their gut microbiome and are often less colonised by microorganisms such as Bifidobacterium and Bacteroides and more frequently colonised by Clostridium difficile, a bacterium that can infect the bowel and cause diarrhoea (21,22,26-31).

The lack of gut microbiome colonisation means infants who are C-sectioned are associated with an increased risk of immune disorders such as asthma(32), allergy(32), and type 1 diabetes(33)  and there is a greater incidence of obesity(35).

Preterm infants are defined as infants born before 37 weeks of pregnancy are complete(36).  Preterm infants have to overcome several severe health effects due to their immature gut and often are presented with immune, respiratory and neurological issues(8).  Therefore, they will often have to endure long stays in hospital and frequently be put on artificial respiration, fed artificially or parenterally and put on antibiotics(8).  All of these factors are likely to hinder microbial composition and development within infants resulting in a delayed colonisation by Bifidobacterium or Bacteroides. Additionally, their stools often contain a higher level of Enterobacteriaceae, Enterococcus, and other opportunistic pathogenic microorganism compared to full term infants(31,37-41).

Probiotics during pregnancy – the evidence

A number of large observational studies have investigated if the consumption of certain probiotics could help in maintaining a normal pregnancy and avoid the complications above. More specifically, the probiotics examined was Lactobacillus (L.) acidophilus BIFOLACTM5, L. rhamnosus BIFOLACTMGG, and Bifidobacterium animalis ssp. lactis BIFOLACTM12. The study described in the following was a part of the Norwegian Mother and Child Cohort Study, where several thousand women were provided with two questionnaires during the first 4-5 months of pregnancy. The questionnaires were designed to provide insight on the mother ́s health and dietary patterns, specifically in relation to the consumption of probiotics. When comparing women with a daily intake of probiotics to women not consuming probiotics, in relation to the likelihood of preterm birth, it was shown that the daily intake of probiotics reduced the probability of preterm birth by 18% (fig. 1)(42). 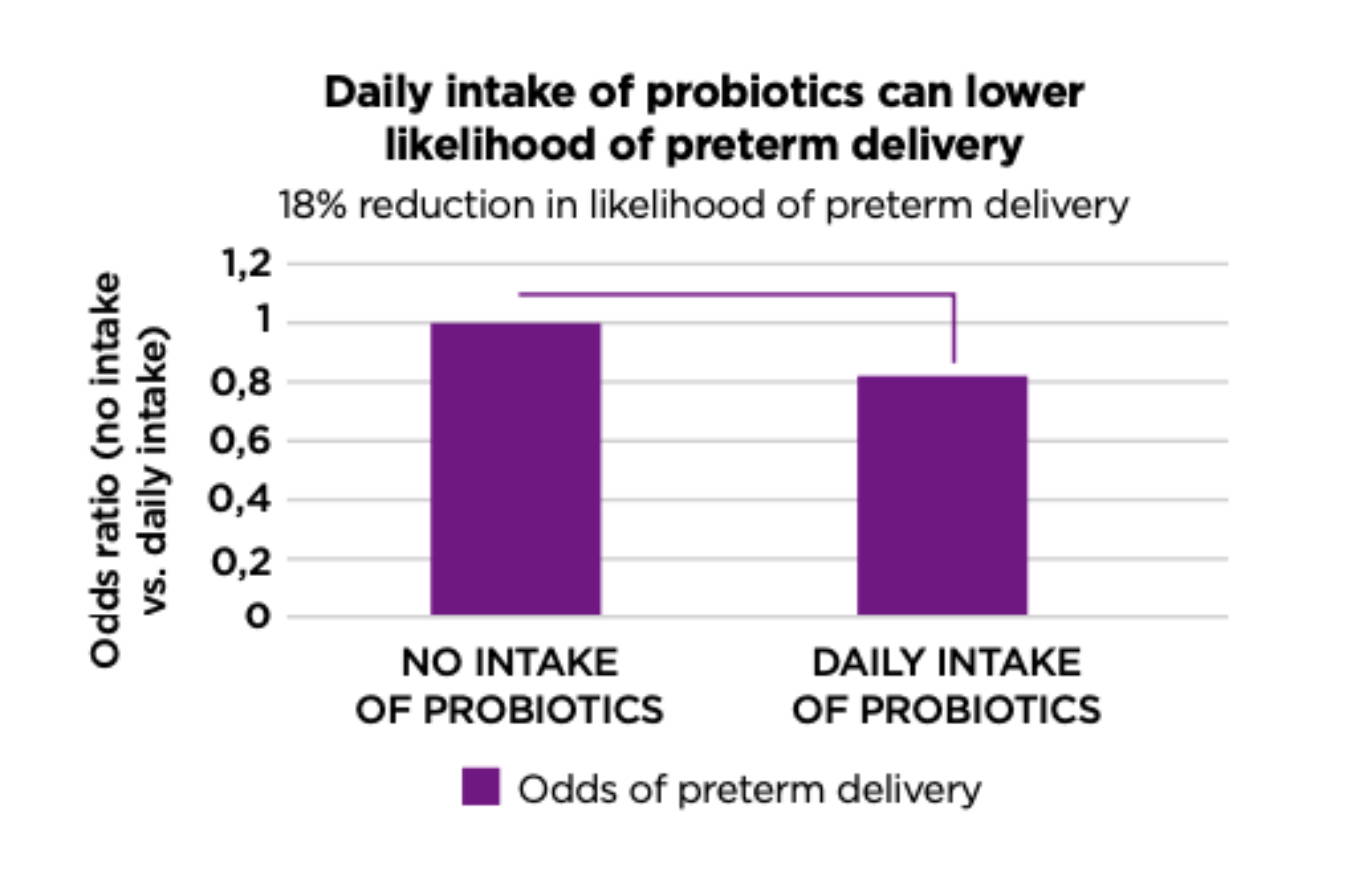 The daily intake of probiotics reduced the likelihood of preterm birth by 18% .

The observations from Norway have been further corroborated by a number of intervention studies, using a combination of the same strains as those previously investigated. In addition to outcomes of the studies in Norway, the effect of probiotics on the mother ́s metabolism has also been examined. In a study from Finland, a combination of L. rhamnosus BIFOLACTMGG, and Bifidobacterium animalis ssp. lactis BIFOLACTM12 was tested. Here 256 pregnant women were divided among three groups: a control group receiving placebo, a group receiving dietary counselling and placebo, and a group receiving dietary counselling and probiotics. The mothers consumed the placebo or probiotics daily for approximately 12 months (first trimester to end of exclusive breastfeeding). The results of the study showed that consumption of probiotics led to a significant reduction in the frequency of women with gestational diabetes mellitus (GDM) (figure 2)(43). 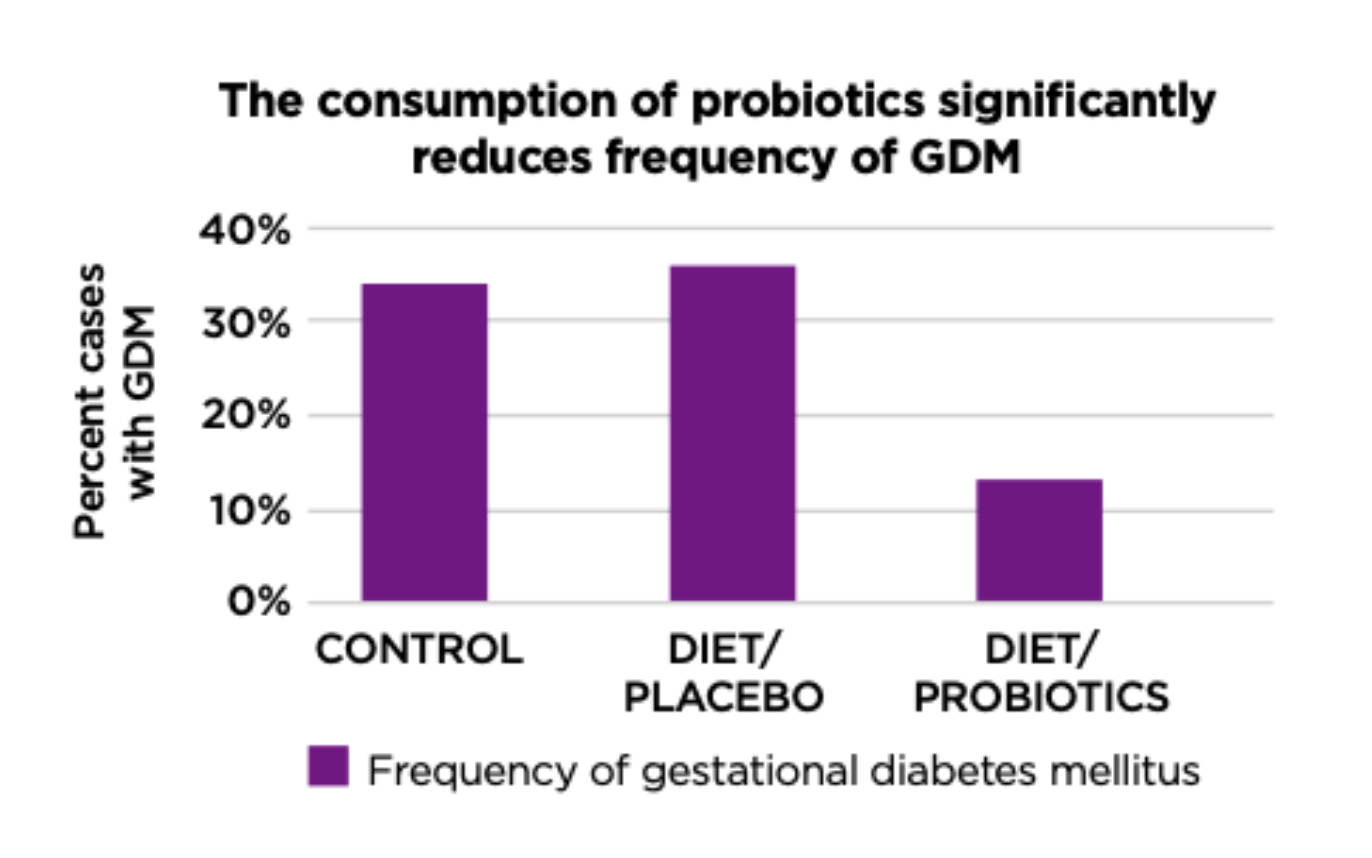 The illustration depicts the difference in the frequency of gestational diabetes mellitus in the study groups.

The consumption of probiotics was shown to reduce the frequency of gestational diabetes mellitus (probiotics:13% vs. control: 34% vs. diet/placebo 36%)(43).

Besides providing support for the mother during pregnancy, maternal consumption of probiotics has also been shown to affect the infant health. A study investigating the effect of consuming L. rhamnosus BIFOLACTMGG on infant immune maturation included 62 mother-infant pairs. The mothers consumed either probiotics or placebo from 4 weeks before giving birth through the breastfeeding period. The study showed that probiotic consumption resulted in a significant reduction in the prevalence of chronic relapsing atopic eczema (probiotic group: 15% vs. placebo group: 47%) (figure 3). This was further associated with a significantly reduced risk of acquiring atopic eczema(44). 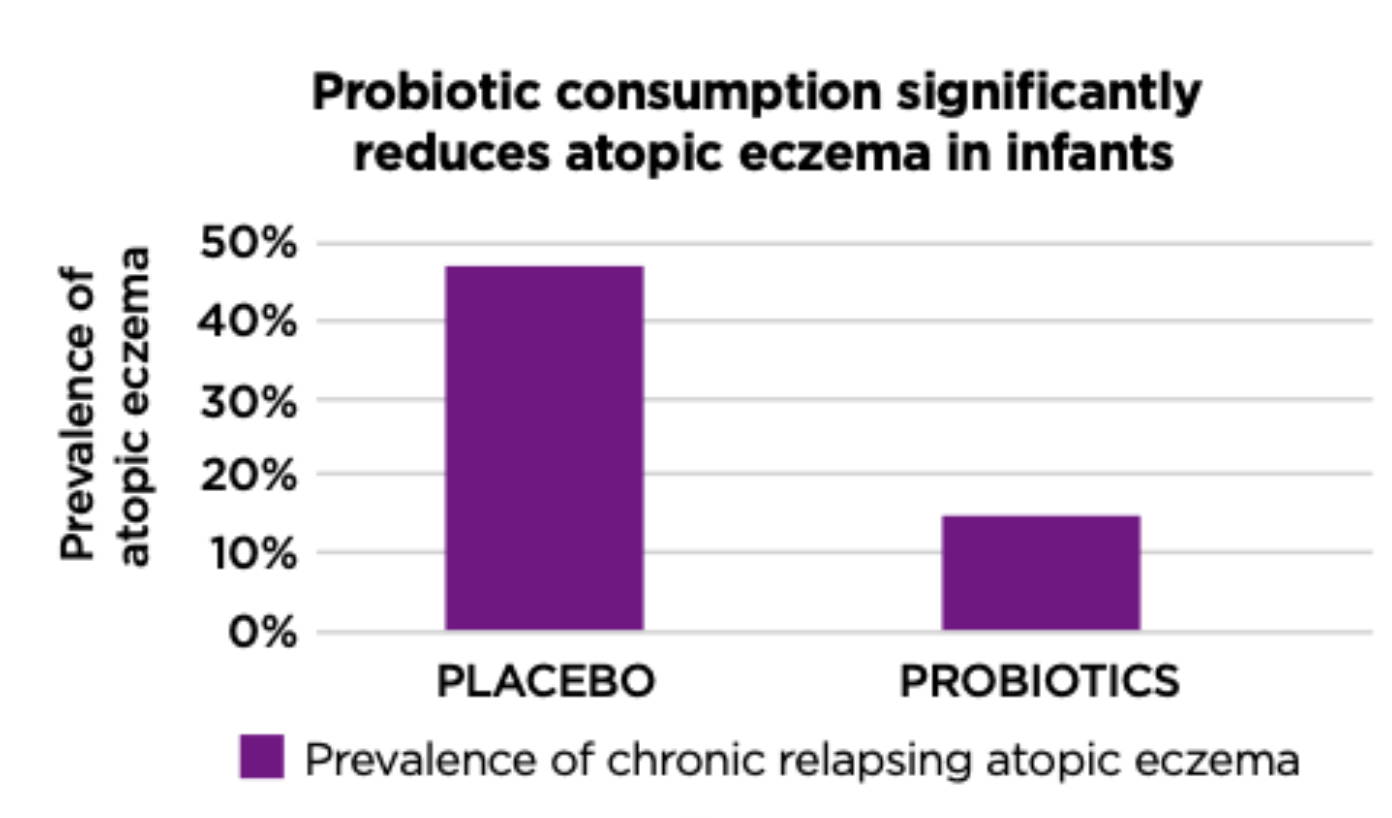 Figure 3 - Pregnant women taking probiotics to reduce the development of atopic eczema in their babies.

Probiotics have been shown to be safe to take during pregnancy, especially Lactobacilli and Bifidobacterium. They have shown to be well tolerated and have a low risk of side effects (45,46). Additionally, the evidence has shown that the consumption of probiotics should be encouraged amongst pregnant women to decrease the risk of complications during pregnancy and reduce the incidence of adverse health effects in infancy and into adulthood.

Neural tube defects (NTDs) is one of the most common serious birth defects throughout the world, affecting 1 in every 1000 pregnancies. NTDs can result in termination of foetus or fatal or severe disabilities of an infant (47).

NTDs can be prevented by the consumption of folic acid during pregnancy. Folic acid is the man-made version of the vitamin folate. Folic acid is essential for normal and maternal tissue growth and development during pregnancy in order to meet the rapid growth and nutrient demands for the placenta and foetus. It is recommended that all women who are trying to get pregnant and during the first 12 weeks of pregnancy should consume at least 400ug of folic acid per day(48).